All four finalists qualify for the Championship proper

The top 6 entrants on the order of merit automatically qualify for the Championship Finals.

Everyone ranked 7 or under on the order of merit will be entered into one of two Qualifying Tournaments (‘A’ or ‘B’).

The 2 finalists from each Qualifying Tournament (4 in total) will qualify for the Championship Finals and join the top 6 entrants.

The top 4 entrants in the Order of Merit have been seeded in the Championship Finals.

Entrants ranked 7 to 14 on the order of merit are seeded in the Qualifying Tournaments and split between the two events.

In each tournament the top 2 seeded entrants are positioned at the top and bottom of the draws, with seeds 3/4 drawn ‘out of a hat’ and positioned accordingly.

All other entrants are ‘drawn out of the hat’.

Every entrant has the opportunity of at least 2 matches, as a Plate Competition will be established for all first match losers – this will follow the same format as the main event. 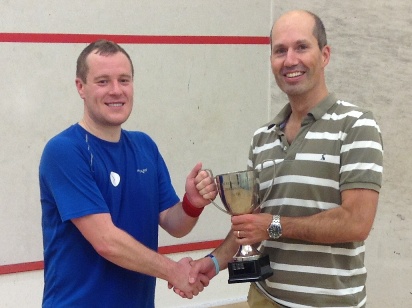 Each match is the best of 5 games.

Until the Quarter Final stage in the Championship Finals, the top player in each draw is responsible for offering his/her opponent at least 3 court options – these options must include at least 1 week day evening and a 1 weekend session.

The top player in each draw is responsible for booking the court, although the court costs should be shared between both players.

You will be required to mark your matches as normal until at least the Quarter Finals of the Championship Finals stage, where we hope to get a marker for this stage onwards.

The ‘top’ player in each draw is also responsible for confirming the result (matches and games scores please) to the Tournament Organiser.

If the ‘bottom’ player does not accept one of the 3 court options offered the ‘top’ player can claim a walk-over if required.

If the ‘top’ player fails to offer 3 court options at least 10 days before the deadline date then the ‘bottom’ player can claim a walker-over if required.

In the unlikely event of a dispute please contact the Tournament Organiser for a resolution.